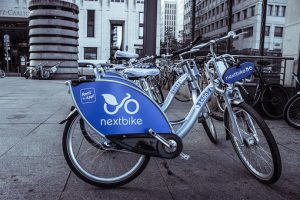 There are many cities that are adopting this type of program to encourage people to utilize cycling in an area of the city such as a downtown location. This is actually a great way to get people to move around an area beside trying to drive their cars which can free up the heavy car traffic. We will answer what are bike sharing programs below.

When Did Bike Sharing Start?

These are pretty impressive numbers that show that this program is viable and is becoming something to help out the pedestrian or visitor of a cities particular area.

Who Can Make Use Of The Program 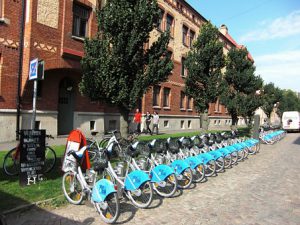 Anyone can use the bikes that can find a need for them. Some people might ride a bus to a location that is not quite where they are trying to go. They can use this bike as the last leg of transportation to their destination.

Then there are the traveling visitors of a city who might want to explore more of the area they are visiting in a fashion where they can stop and visit without the problem of finding somewhere to park a car each time they stop.

Then you have the cyclist that because of the lack of secure places to leave their bike, fear that their personal bike may be stolen so they would rather use the bike from a bike share which will eliminate the possibility of something happening to their personal bike.

The best place I can see this being set up is a college campus. The average student has to walk around campus and a bike share program would be a perfect way to get around from class to class.

Some bike share areas may be broad enough where you can actually utilize the bike to commute to and from work daily as seen in the video below.

These programs are usually set up by local community groups or non-profit organizations. Some of them are a public-private partnership and their objective is to provide free or affordable access to bicycles for short-distance trips in an urban area as an alternative to motorized public transport or private vehicles. This can lead to reducing congestion, noise, and air pollution.

These programs can be operated by one of three sectors. Regional, Municipal or College/University.

North America has many of these programs set up throughout it.

These programs have docking stations all over a certain area of the city. There are perimeters that these bikes are to be utilized in so they are set up for short distance transportation. If you are wanting a bike for a long-term use you would be better off getting a bike from a bike rental company. 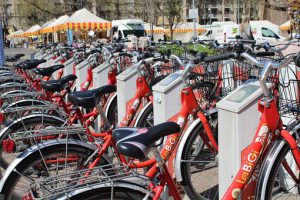 These bikes are locked up and are released to an individual for free or some charge a small fee to use them. It is not unheard of for Ebikes to be used with this type of program as well.

To try to counter theft some stations have implemented rules requiring the user to provide a valid credit card, along with substantial security deposits for bicycles and mandatory security locks. There are also some that are set up on a membership basis as you seen in the video.

There are different generations of the bike share program which are the first generation, called white bikes (or free bikes); the second generation of coin-deposit systems; and the third generation, or information technology (IT) based systems.

Recent technological and operational improvements are also paving the way for a fourth generation, known as the demand-responsive, multimodal system.

Click Here to see a chart of bike share programs in different cities and their program information. 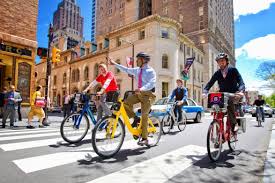 As you can see this is a program that could make getting around pretty conveniently in an area that you may be in a lot working, shopping or just visiting on vacation. Especially those areas where tourist may be staying in a hotel within a bike sharing area.

So I think this bike share program would be a plus in that fashion and the environmental aspect as well.

Thank you for visiting and leave your thoughts or questions on the matter in the comments section below. This always is a good way to share your ideas with others who visit.

8 thoughts on “What Are Bike Sharing Programs?”