This is a long post but very informatively detailed. So keep reading to find out what it would be like to get a partner and do something new this summer. Whether it be your spouse, kid or best friend.

The First Ride – Get Engaged

First of all, I will inform you not to go out and buy a tandem bike unless you know you are going to jump into it & stay in it to win it.

Don’t get me wrong, some of you might already have it in your mind that this is going to be a regular outing and you are going to just go for it. If so there is nothing wrong with that! In fact, I like it.

Your first ride will be more about getting yourself trained to ride with your partner. It is quite different than the two of you getting on your own bike and touring around town.

It would be wise to learn the basics of tandem bike riding so that while you are riding, you are aware of what the other is doing. You will be fusing your particular jobs in regards to riding a tandem bike. You will find out it is a joint effort much like an airplane pilot and co-pilot.

Are you ready? Here we go!

The two riders are given two different assignments. The person in the front is called the captain & the rear rider is called the stoker.

Duties of the captain 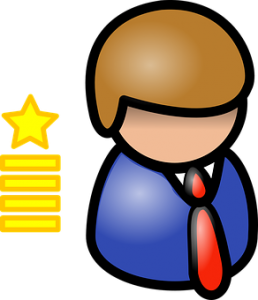 His or her role is is to take control of the bike. Much like Star Treks #1 on the Enterprise sort of speak. Being in control means the balancing, steering, shifting & braking is your responsibility. This position puts the safety of another person in your hands.

The captain must take the rear rider into consideration which means he or she must be steady and predictable as well as riding conservatively. This will make the ride safe and enjoyable for the stoker.

The biggest responsibility of the captain is communication in which you will understand why when I cover the actual riding procedure.

The Role of The Stoker

The stoker or rear rider has the job of supplying the power to the engine of the bike. Applying steady output to the pedals makes the ride smooth and steady. But you are not going to be killing yourself while doing it.

You conservatively apply power so when you need to climb a hill or just want more speed, you are ready to give that extra boost of power.

Get ready – Starting The Ride

There is a certain way to begin riding a tandem bike that will ensure safety for both the captain and the stoker. The following steps will give you a guideline in the proper procedure in tandem bike riding.

There are two ways to mount a tandem bike. One is recommended and the other one you can do but it could possibly cause a problem. The third way is not recommended for safety reasons. Either way, the captain always mounts first.

The best way is to stand on the side of it facing forward with both hands on the handlebars. Then swing your leg forward around the handlebars. I know this sounds quite different than the norm but it has its reasons.

The second way is to raise your foot over the crossbar between the handlebars and saddle. But over time you will probably rough up the paint job or your foot can possibly get caught which could make this way unsafe.

The one thing you don’t want to do is mount it like you do when you on your single bike. If you were to try to throw your leg back and over there is another set of handlebars that will surely grab you one day. Truly a safety issue on that one.

Once the captain mounts the bike, it is his or her job to steady the bike for the stoker to mount. This is done by holding the brakes so the bike is easily balanced and it does not move.

For safety, spread the feet wide enough apart to clear the front set of pedals. This will protect your shin and calve from being smacked by the pedal once the stoker mounts and puts his or her feet on the pedals.

So make as wide of a stand as necessary holding the bike in a way that your body weight is used to steady the bike rather than a physical strain. 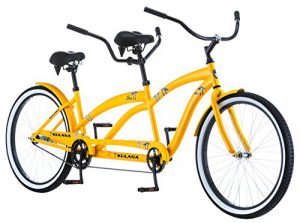 This is actually going to start off easy for the stoker because they mount it as if they were on a single bike by throwing their leg back over the saddle holding on with both hands on the handlebars.

Once on,  the stoker will put both feet on the pedals while sitting. At first, it takes some getting used to because you are basically airborne at this point and not in control of your balancing. This could make it a little uncomfortable. Captains should be aware of this and make it as comfortable as possible.

Stokers, this is where you must trust the captain to relieve some of the anxiety. This will all disappear really quickly. In fact, it will feel worse than what it really is when the captain moves the bike. So you will really have to work hard at not putting your feet down in the process.

Third: Get Ready To Move Out

As of now, the captain should have the bike stable, holding the handlebars, brakes locked and both feet on the ground wide apart.

What this will do is give maximum take-off power on the first stroke. Any other way of doing this will make a rough & shaky start. 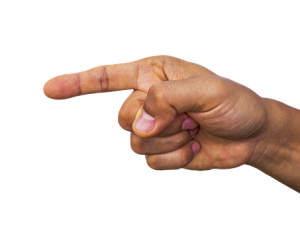 Earlier I mentioned communication is was a responsibility of the captain. This is where you will understand why. There are 4 commands that will be used. On, off, bump & shift.

With the pedals in their proper place, in front of the captains starting foot knee, the captain says “On” which means for the stoker to start pedaling. The stoker does not wait for the captain to pedal since you already have both feet on the pedal. The captain will be coming down on the pedal as well. This is what gives the tandem pair the initial push off.

Now at the same time, the captain is pushing down on his pedal while raising up to get into the saddle. The first time may not be the smoothest start off but it will get better quickly. No need to think it is hard as it sounds.

It will most likely feel strange to the captain at first because there are two weights on the bike, steering may not feel the same as it would on a single rider bike. But like everything else, it gets easier the more you do it. Most importantly just keep pedaling.

Now the two are riding and in the groove of tandem riding. But what happens when you need to stop? This is where the captain if needing to slow down or stop says “Off” which means to stop pedaling to the stoker.

The captain sees everything in the front and the stoker has limited vision. So that is the only way the stoker will know to let up off the pedals. This is needed to keep the bike going safely and precisely. Rolling up on intersections is when these commands really come in handy.

Once at a stop the stoker has no need to take his or her foot off the pedals, come off the saddle or put their feet on the ground. It will make a better re-start plus the stoker is already in the original start position. 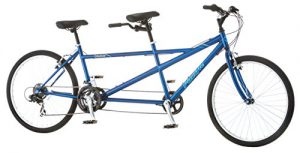 This command is exactly what it sounds like, a warning of a bump coming up. Because the stoker can’t see what is coming up, it will help them prepare themselves. You know how we brace ourselves when we are riding on a single bike when we ride up to pothole, manhole, railroad tracks or anything we feel might give us a rough moment.

Because the captain is doing the shifting he or she has to remember the other person is pedaling also. When we shift gears on any bike we know not to hard pedal at the same time. We soft pedal. So the captain must let the stoker know when they are about to shift so they can lighten their pedal stroke.

This command will most likely be given when approaching a climb or when wanting to pick up speed. Without this command, the shifting may result in a rough gear change or a possibly dropped chain.

We definitely don’t want that in any case. So captains always remember there is a partner behind you that you must keep informed so your ship runs smoothly.

This is something that I would say could use some practice before you just jump right into doing it. Standing could give each rider some relief from sitting down all the way through the ride.

Standing will probably be a little more fatiguing for the captain because he has to steer & balance the bike while doing it. But it will really help the stoker who is in the sitting position even on stops.

How this works is the captain will gear up as to be climbing a hill. Then the captain counts off “One and Two and Up”  Both riders stand up together and keep pedaling.

Practice will make this maneuver go smoothly over time. In fact, it will feel quite good accomplishing a smooth stand with your partner.

Practicing will only make you better at being a tandem bike rider. After you have gotten in sequence together at riding & stopping, you might want to try practicing standing.

Find a nice flat surface on a straightaway with little or no traffic. Once you get a nice pace, gear up and stand up together. Do this from time to time and you will become quite good at it.

I guess you say finally, huh? Well if you are still reading this I want to thank you for your time and I hope that this did not make you leery of wanting to try tandem bike riding. It is actually not as bad as it sounds and is a great way to enjoy your spouse, kids, or best friend.

So don’t let all that was mentioned overwhelm you. It is much like riding a bike for the first time. Remember the thrill you had then? Well, imagine the high fives you and your tandem partner will 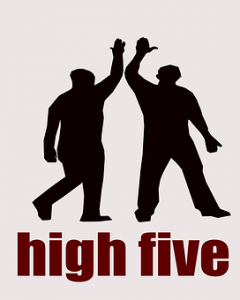 be given once you have mastered it.

I hope you enjoyed this article and will make tandem bike riding one of your choices this summer. Remember if you decide to buy a tandem bike you can get it right here on this site at Ron’s Cycle Plus where the prices are always one of the lowest around.

Click here to go and have a look at some nice tandem bikes right now! There are other cycling needs as well.

Thank you for visiting and if you have any questions or comments please feel free to leave them in the comments section. Happy biking this summer. And remember to Keep On Pedaling!

16 thoughts on “How To Tandem Bike Ride”