Are you a man or woman who rides a bike and want your spouse to join you so they can join your world of bike riding? No matter if you tour ride, pleasure ride or ride just for the heck of it, you want to show them that they can do it too. My wife doesn’t ride bikes so I tried to figure out how to get her on a bike so that I could say that I enjoy cycling with the spouse.

In this post, I am going to tell how I finally got my wife to take her first bike ride with me. And when she did she thought it was great. She let me know that she wasn’t going to ride a lot like I do, but that is what I said when I first started. We will see!

Believe it or not, most people feel that they physically won’t be able to get out and ride for a period of time. They think that they will get out there and embarrass themselves when they go 5 blocks and have to throw in the towel. Then there is the thought that I would just ride off and leave her way back.

This is understandable when I have been riding for a spell now and I can put some miles in pretty quickly. I know from when I first started that you really don’t know how to pace yourself at a good speed so you will get fatigued pretty quick. And if you are not mentally ready to take on the challenge it is pretty rough.

The Way I Got Her To Try It

Well, one day I asked myself, how could I convince her it wouldn’t be as bad as she thought? Well, I have an e-bike that I use to pull my lawn service trailer in the neighborhood. I have ridden it to work sometimes and I know that because it is pedal assisted it doesn’t beat you down. 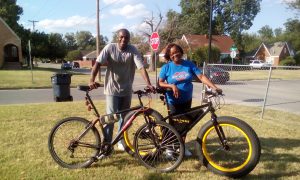 But at the same time, you get the workout you would get if you were on a traditional bike if you ride it long enough and not rely totally on the motor. I would just hope she doesn’t ride me too hard since she has the motor. LOL.

Well, she took it further than I thought. She actually did not use the motor until we were on a hill or got a little tired. She actually did pretty well. I was impressed and ask her to try to take one day out of the week for now to ride.

She said okay, but don’t try to force me, let me go when I am wanting to go! What the heck, I can’t push the issue at least I got a start.

Hopefully, I can get her to get up on Saturday or Sunday morning because she hates the heat, and take a small ride until she gets used to it. We have a very nice river here where we live that has a path on each side. You can ride to the end and turn around and ride up the other side.

I think this would be a good outing for us to start. After doing that a few times she probably will get bit by the riding bug like I did years ago and it will become just part of her weekend plans. There are plenty of other places where we can explore. 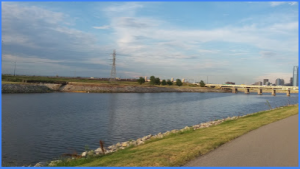 Our downtown area here in Oklahoma City is in the process of beautifying the downtown and they thought about cyclist as many other cities are doing. Maybe we can hit every route. This will ensure that I will be cycling with my spouse regularly.

You know, it is always a beautiful thing when you can find something that feels new and exciting to you when you have spent some years together and thought you might have done it all. So if you have someone you want to enjoy cycling with, think of why they might not want to try it.

Most of the time it isn’t because they don’t want to. It is likely they may feel that they physically can’t handle it. So if you can come up with a way to show them even if you have to start them out on an e-bike, it will be well worth getting the riding partner that you love to join you. You can Click Here and then click on e-bikes to see a variety of e-bikes that might work for you.

Here is another option you can consider. Tandem Bike riding is a good way to get in sync with one another. Bicycles for two is a great way to establish communication between the two of you. Click Here to get more information on Tandem Bike riding.

I hope you enjoyed this post and that it will encourage some of you to Keep On Pedaling and this time with your spouse.  Please leave any questions or comments or ways you got someone started below.

12 thoughts on “Cycling With The Spouse”