Many cities are starting to realize that the biking community is on the rise. Many of them have started putting plans into their budgets to provide riding lanes throughout the city. This opens up more ways to enjoy bike riding in your respective areas. We are seeing an increase in cyclist because cities are responding to cycling.

Benefits For The Responding Cities

Reducing Traffic Delays – I think that cities are seeing how cyclist will make their cities thrive in many ways. For instance, the city of New York increased their travel time in areas of the city by adding bike lanes. It was actually done without a total reconstruction of the street.

It was all accomplished by decreasing the size of lanes that actually made it possible to keep the same amount of lanes and even adding a small buffer to be included. 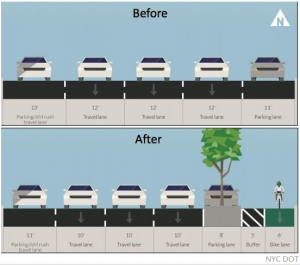 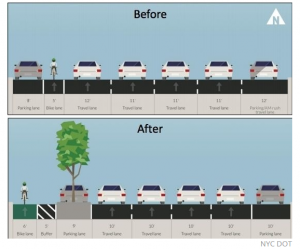 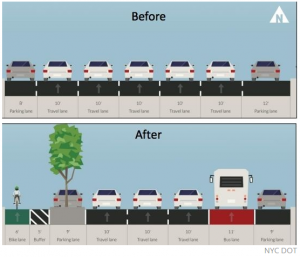 Stimulating The Cities Economy – At first, it was thought that bike lanes would hurt businesses because it would deter vehicular traffic from stores in the area of bike lanes.

Let’s take Manhattan for instance. After bike lanes were implemented, the businesses saw an increase of 50% in the area of the bike lanes. This could be due to the fact that those lanes brought another type of shopper to the area. That being the bike riders.

Cleaner City Environment – As the number of cyclists is on the rise, that means fewer cars are being used reducing emissions from the vehicles that are polluting the air. One thing for sure, the bicycle is not polluting the air or burning fossil fuels.

So in big cities that do have a lot of traffic, their pollution problem would decline as more people start to use cycling as their means of commuting to and from in town.

Studies On Protected Bike Lanes – Protected lanes are different than the traditional bike lanes in the fact that they have barriers such as a curb, parked cars, or plastic post between the autos and bike riders.

The NYC Department of Transportation shows that small business had an increase in sales while being in an area where there were protected bike lanes.

Portland State University/Bike Portland.Org did a study that showed people who drove to local businesses spent more per visit than cyclists but cyclists offset that by visiting more often and spending more money accumulatively.

Another study by the Frontier Group Think Tank found that annual miles traveled by car amongst the ages of 16 to 34 years old dropped around 23% from years 2001 – 2009. It also found that this age group took 24% more bike trips in that same period.

So you see, bike lanes are having an impact that is influencing city planning nowadays. Big cities are starting to take a really good look at the cycling world these days.

Insight On A Cities Development Plans – The City of Chicago has unveiled its Chicago Streets for Cycling Plan which is developing 650 miles of green & traditional bike lanes by 2020. 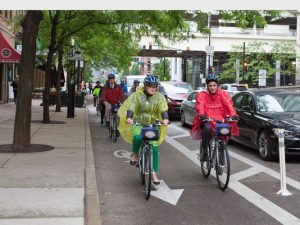 So as bike riders, this gives us a way to commute and enjoy riding feeling safer than we normally would just riding amongst automobile traffic without bike lanes. Now this will enable bike riders to travel to shops, businesses, & city attractions using a bicycle as the mode of transportation.

With this comes cleaner air, a boost in the economic structure for local business, & a safer riding environment for the automobile driver and cyclist alike.

Thanks for visiting and I hope this post opens the eyes of many about the benefits of bike riding and how cities are starting to respect the biking community.

Please feel free to comment on the subject or ask questions in the comments section. We welcome all feedback on the issue.

8 thoughts on “Cities Are Responding To Cycling”